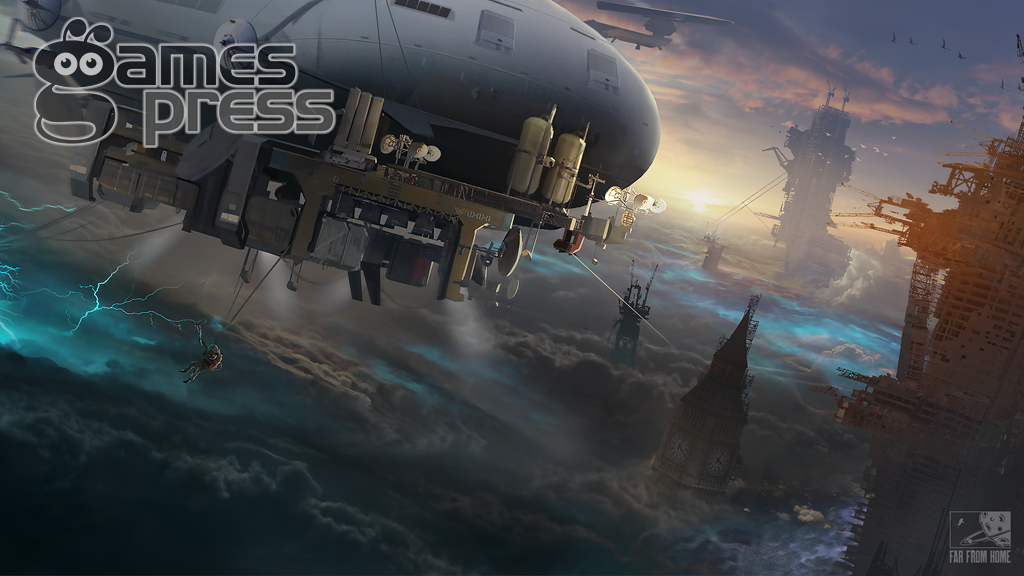 As a lone zeppelin hovers above the poisoned Earth, a desperate scientist steps out and descends into the clouds below to face the unknown…

Today marks the day that Far From Home emerges from the dark. A group of highly experienced AAA developers, who for years have been in talks on an idea that never could seem to let go, step forward with their exciting project, now in production.

While specific details of their first game, code-named “Project Oxygen” are still a guarded secret, certain elements have seen the light. Players will embody a lone scientist, exploring an ecologically ruined and evolved Earth after humanity failed to fight off their own demise. To allow for a deeper immersion in this unique world, the game will be set in first person perspective and built around a strong survival game loop that will require players to regularly venture deep into the dangerous unknown.

Exploration, survival and success will be strongly tied to each player’s technologically advanced zeppelin air base that they will be able to pilot, upgrade and customize. This zeppelin will be the player’s main lifeline and refuge against the inhospitable world raging below and around them.A mobile air base that will act as their everything – transport, life support, storage, research laboratory, shelter and escape.

“Project Oxygen” is being built in Unreal Engine and is currently intended for PC, PS5 and Xbox Series X. The game will be a single-player experience upgraded with a coop mode at a later stage.

The Story So Far – When Our World Died, Two Emerged in its PlaceAt the peak of a global ecological disaster, humanity was pushed towards the sky as the Earth had become increasingly inhabitable. In a desperate bid to survive, people created monstrous, makeshift towers to rise above the inhospitable layer of toxic fumes. From here they would rebuild society, create a staging base for research and try to undo the disaster unfolding below. Inevitably, they failed. It remains a mystery, however, how a small group managed to survive and escape.

Now, hundreds of years later a vicious and newly evolved ecosystem lives and flourishes in the toxic dust covering the Earth, while the empty towers of humanity’s last stand crumble above. It is then that one lone human returns and the story of “Project Oxygen” begins.

A Team of Dreamers – Who is Far From Home? The Far From Home crew each come from various corners of the AAA and indie game dev galaxy, having notably worked on titles such as Dying Light, Dying Light 2, Dead Island, The Medium, Chernobylite and Divinity Original Sin 1 and 2.

With this collective wealth of experience and talent, the team are aiming to create games that revolve around mature topics, meaningful themes, while delivering a strong gameplay focus. They are equally driven by the idea of finally breaking away from the unsustainable AAA practices but still being able to surpass the scope and quality restraints that many cash-strapped indies often face. Thus the team is pushing to create high caliber AA+ games, with “Project Oxygen” already having highly polished visuals and tight survival gameplay strongly built into its early design and planning.

To put these ambitions into motion, Far From Home has already secured the first round of significant funding from notable Polish video game investor funds and will soon be looking to scale up the team to go into full production. Our Own Home Base – Wroclaw Poland

The home base for the Far From Home crew will inevitably be the city of Wroclaw, already a hotbed of talent with teams such as Techland, CDPR and Donkey Crew. The team will be working remotely for what remains of 2020 and will be open to bringing on team members remotely for the entire project.

For more info and current team openings visit the links below: