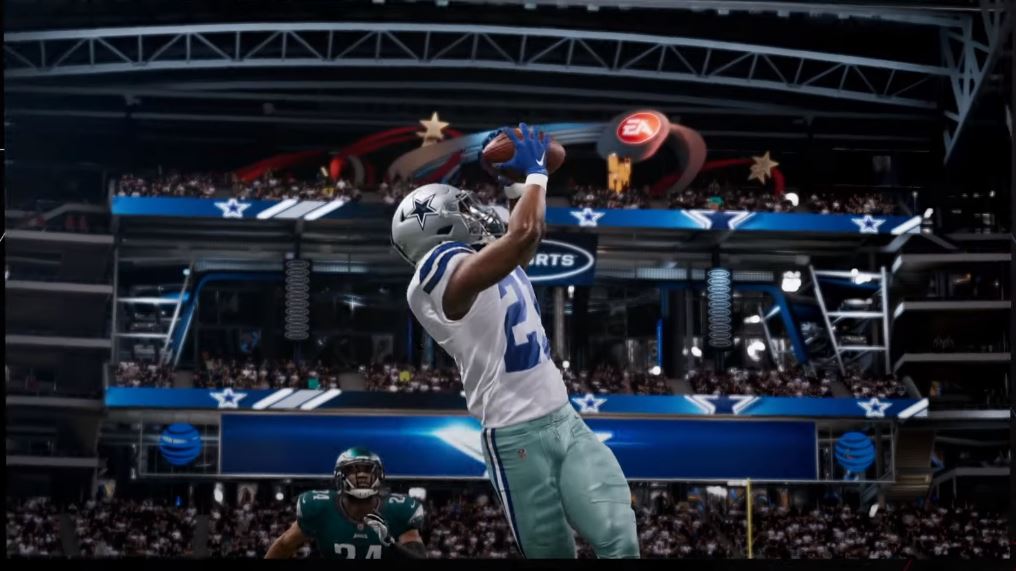 Electronic Arts is bringing players the most realistic football simulation experience with today’s unveil of EA SPORTS Madden NFL 21on Xbox Series X|S and PlayStation®5. Madden NFL 21 on next generation consoles sets a new standard of realism and authenticity, highlighted by all-new gameplay innovation that brings fluid player movement powered by real-world athlete data from the NFL’s Next Gen Stats. EA SPORTS is also delivering the most immersive Madden NFL experience to date on new hardware with enhanced game day presentation with new visual details showcased by deferred rendering and lighting and location-based audio that bring the sights and sounds of the NFL to life.

On December 4, when Madden NFL 21 launches on next generation consoles, players will receive their first taste of the future of Madden NFL gameplay with Next Gen Player Movement powered by the NFL’s Next Gen Stats. Real-life player movement data – including route paths, acceleration rates and speeds – is captured by the NFL using sensors worn by every player in the league during each game. This data, called Next Gen Stats, is fed into Madden NFL 21to drive fluid animation selection based on how players actually move when running, cutting and changing direction on the field creating the most realistic player movement in franchise history. Next Gen Player Movement comes to life on both sides of the ball, with elite route runners running their actual routes logged by Next Gen Stats and showcasing explosive first steps and direction changes, while elite defenders will react more realistically to opposing routes and runs.

“Every console transition year, our team is equally excited by the possibilities of new technology and inspired to develop both new and improved experiences for fans of Madden NFL. This year is no different with Madden NFL 21 representing a major step forward in the future of football gaming with the addition of real NFL player data from Next Gen Stats,” said Seann Graddy, Madden NFL 21 Executive Producer. “Taking advantage of the new hardware from Sony and Microsoft, our EA SPORTS team has created an incredibly immersive game that delivers the most authentic and realistic NFL experience players will have ever felt.”

In Madden NFL 21 players can also expect replays powered by the NFL’s Next Gen Stats, which provide breakdowns of key plays showcasing this exciting new data, to give players a strategic advantage to make adjustments to their game plan based on how the game is unfolding. Play calling in Madden NFL 21 is also new with star-driven play calling that makes calling plays more customizable and intuitive for players to get the ball in the hands of their favorite players, while also learning the rationale behind each play. Players will also have the ability to save their favorite plays to find quickly later.

Madden NFLhas never looked, sounded or felt so real than Madden NFL 21 on next generation consoles. On game day, the authentic stadium environments are the most immersive to date with deferred lighting across all surfaces that improves visual fidelity, enhanced player visuals and all new realistic weather. Extremely fast load times will get players to kick off in seconds and keep them immersed as stadium environments load with unprecedented speed.

Taking advantage of the new hardware from Sony and Microsoft, our EA SPORTS team has created an incredibly immersive game that delivers the most authentic and realistic NFL experience players will have ever felt.”

Player bodies are also improved on next gen with unique body compositions across all positions, and visual details that change as the game unfolds. New cloth animation tech dynamically updates the jersey wrinkles based on player movement improving player silhouettes and making player bodies feel more organic and live. Plus, new location-based audio makes the sounds of the game feel like they are reacting to the player’s view of the action. In addition, the haptic feedback from the new DualSense controller on PlayStation 5 deepens the gameplay experience as players will be able to feel the impact of passes, catches, tackles, hits and kicks.

This is all on top of fan-favorite Madden NFL modes including The Yard, Madden Ultimate Team (MUT), Superstar KO, Franchise, etc. that players will be able continue to enjoy with improvements to both current generation and next generation consoles alike.

Players who buy, or who have already bought, Madden NFL 21for Xbox One and/or PlayStation 4 from now to the launch of Madden NFL 22get the Xbox Series X|S and/or PlayStation 5 version of the game for free* when the new games are released on December 4. Players can carry over their progress and content in Madden Ultimate Team, The Yard and Franchise modes. Players also have the option to buy standalone NXT LVL editions of Madden NFL 21 on the Xbox® Series X|S and PlayStation®5 for $69.99, complete with additional high value Madden Ultimate Team content.

Madden NFL 21is developed in Orlando, Florida by EA Tiburon, and is available now for Sony PlayStation®4, Microsoft Xbox® One and PC via Origin™ and Steam. Madden NFL 21 will launch on Xbox® Series X|S and PlayStation®5 on December 4 and will land on Stadia – Google’s cloud-based gaming platform – this winter.