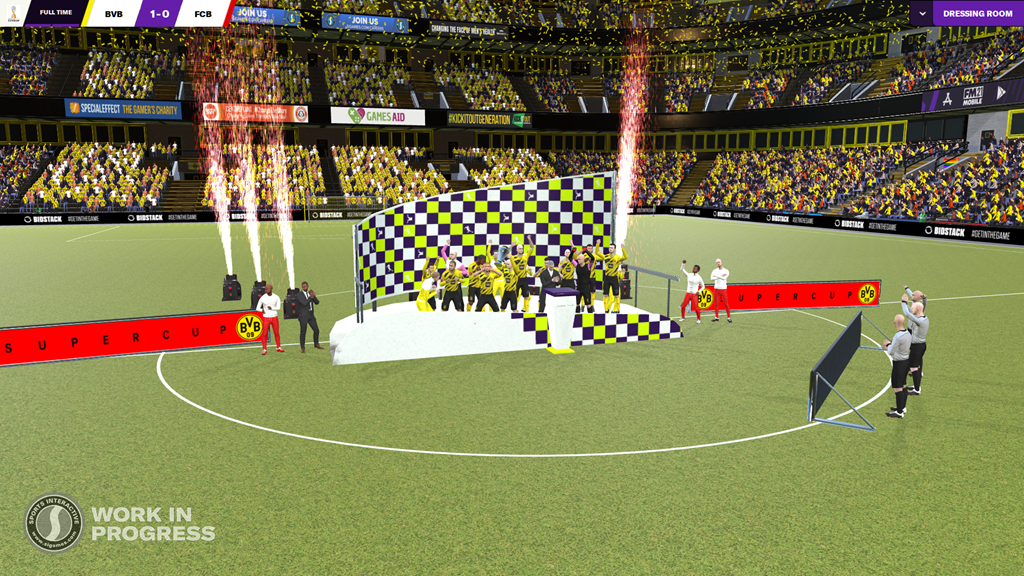 Sports Interactive  and  SEGA  today unveiled the main new features of Football Manager 2021.  The benchmark football management game is scheduled for November 24, on the Epic Games Store  and  Steam

In this new episode, managers will enjoy increased control over the fate of their team, on and off the pitch thanks to new gameplay systems, a level of analysis and in-depth information and many additional resources. their disposition. The interactions between players and media have been revamped to create an even more believable experience; game days are now more spectacular thanks to numerous graphics and presentation improvements, which are accompanied by new pre and post-game events. Managers will have more power over recruiting players, as well as new ways to celebrate trophies at the end of the season.

We have published four posts dedicated to the main improvements to come, to be discovered on  the official  Football Manager blog .

This is just the start of our announcements regarding these new features; others will follow in the coming weeks. From tomorrow until the beginning of November, we will be lifting the veil on the news of Football Manager on social networks ( Twitter ,  Facebook  and  Instagram ) as well as those of the director of the Sports Interactive studio, Miles Jacobson ( Twitter  and  Instagram ).

We’ll also be posting several other posts to give you a full rundown of this episode’s significant improvements like artificial intelligence, new faces, and data analytics.

Fans who pre-order Football Manager 2021 (on PC and Mac) from an authorized SEGA * reseller will get 10% off, until launch. They will also have the opportunity to launch their managerial careers a little early with Early Access, which will open approximately two weeks before the official release date. Single-player campaigns launched during this period may be continued in the final version of the game.

Get a first look at the major features of Football Manager 2021.

With new means of communication, redesigning existing systems and more varied interactions, communicating with players and the media has never been so effective and realistic.

The addition of gestures allows managers to express themselves in a more nuanced way, whether during face-to-face interviews, during their weekly press conference or for a point with the team before a key meeting. Using the different gestures wisely will allow managers to add impact to their statements and inject a certain dynamic into their conversations with players and the media.

Another novelty of FM21: Quick Chats allow managers to have short informal interactions on different subjects that do not require a formal meeting. They can take place in person with the players of his team, or remotely with players on loan, other managers or journalists.

Managers will quickly notice that existing interaction scenarios like press conferences, team discussions and face to face meetings have been improved in FM21. Individual items are arranged more clearly, managers have more contextual information available to them during these interactions, and it is much easier to analyze the body language of other individuals in the room as they react to it. your words.

In FM21, every encounter is a real spectacle. The flow of match days, from pre-match preparation to the aftermath of the final whistle, has been completely redesigned with the addition of new events and elements.

Before entering the locker room, managers have the opportunity to make tactical adjustments and last-minute roster changes at the new pre-match tactical meeting. During this session, staff deliver key analysis and tactical advice that could prove crucial to securing victory on the pitch. When the composition of the teams is confirmed, the managers have the game sheet available to make the judicious tactical changes depending on the opponent.

When the match starts, managers have a better view from their stands thanks to a redesigned user interface that emphasizes action. Elements typical of media broadcasts and effects specific to the pitch, such as crane cameras or  steadie cams,  add to the atmosphere and readability. On the pitch, the action is more readable and spectacular than ever thanks to improved lighting that delivers finer, more realistic shadows in all playing conditions. Players also gain smoother, more natural-looking animations.

During and immediately after the match, managers benefit from better analyzes with our new xG system. It is now very easy to gauge the effectiveness of the teams in the face of goal and the general quality of the game produced, while benefiting from more relevant and in-depth analyzes from the technical staff at half-time.

New meetings and interactions, along with the introduction of a new staff member, refresh one of the most popular and important areas of the game.

The new Recruitment Meeting will ensure that the manager and his staff share the same vision on the transfer market, whether on the criteria to be improved as a priority or the club’s long-term strategy. These meetings take place before the transfer window and allow the manager to consult the reports, define the assignments and priorities of their scouts and analysts during the entire market opening.

In FM21, managers also have more interactions with player agents. Agents can be approached to gauge their clients’ interest in your club, and find out all about the requirements to get them to sign a contract.

Managers can relive their season and enjoy their successes like never before. Fans and the media have short memories, but FM21 offers managers the opportunity to stop by the past season to celebrate their successes, before turning completely to the following season.

The field celebrations have been completely revised, including the presentation of the trophies with podiums, confetti cannons and most importantly, the trophy lift. The post-game, including media attention and general excitement, has also been redesigned.

Whether they lift a trophy or narrowly avoid relegation, managers now enjoy an exhaustive recap of the past season that presents them with the best moments, on and off the pitch.

* The pre-release Beta will only be available through SEGA authorized digital resellers. The full list of these resellers, as well as full details of SEGA’s policy regarding online resellers, can be found here .