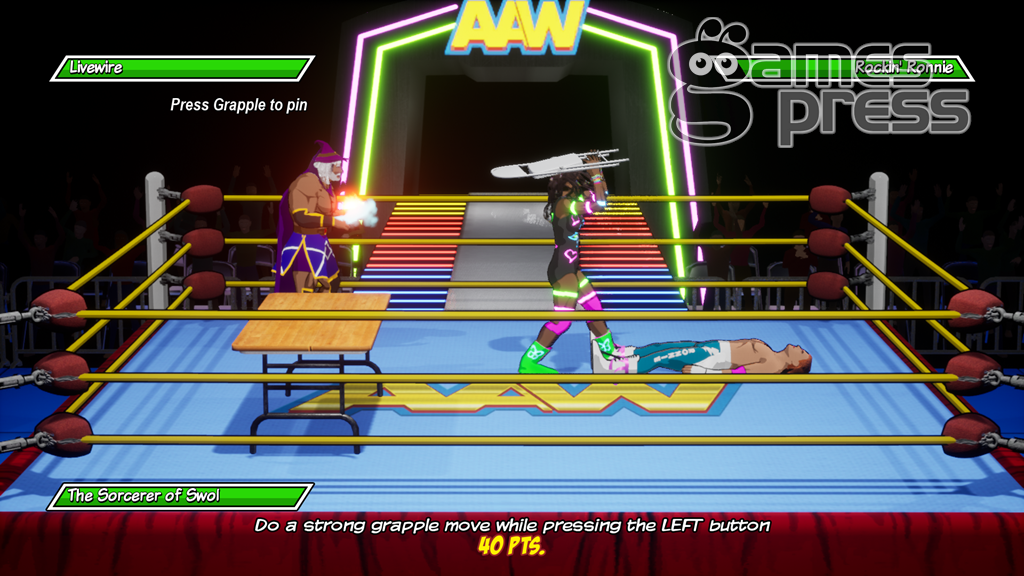 Dust off your luchador masks and prepare for pandemonium! Independent developer VICO Game Studio, in partnership with Reverb Triple XP, announced today a return to the ridiculous ruckus of arcade wrestling with Action Arcade Wrestling, coming to PlayStation 4, Xbox One, and Nintendo Switch Spring 2021!

Select from over 30 extraordinary wrestlers and unleash their unique abilities in the ring. Wield the cosmic power of El Universo, unleash laser beams from the futuristic K-FaY13E, or drop radioactive attacks from Biohazard – there ain’t no cookie-cutter wrestlers here! Don’t see a wrestler crazy enough for your tastes? Jump into the AAW Wrestle Lab and unleash your imagination with hundreds of customization options to build the ultimate wrestling hero or villain!

Cast bolts of lightning in Action Arcade Wrestling that would make a Sith Emperor nod in approval.

“We wanted to capture everything we loved from the fast-paced arcade wrestling games we grew up with in Action Arcade Wrestling,” states Eugene Tchoukhrov, lead programmer and producer at VICO Game Studio. “It was really important to make this game fun to control, easy to get into, and have a lot of outlandish antics – if you aren’t into dressing up in fancy tights while body slamming your friends with electricity, you aren’t living life to the fullest!”

Action Arcade Wrestling brings everything you love from ‘90s wrestling games with its own twist of chaos and fun. Join the action and step through the ropes in this fast-paced, arcade wrestling extravaganza to superkick the overly simulated wrestling games out of the ring! Choose from a roster of 30+ outrageous wrestlers executing powerful attacks and superhero-like abilities in the most over-the-top wrestling game ever conceived.