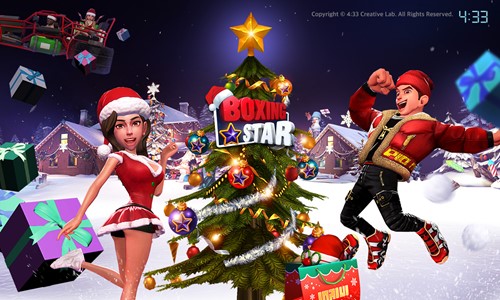 Publisher and mobile game developer FourThirtyThree Inc. (4:33) is celebrating this Christmas by introducing a Christmas theme in Boxing Star.

The new Christmas costumes include the Santa beard, Glasses, and Santa Suit. These new costumes are also event-exclusive and can be found in the Costume Jingle Bag.

Alongside the new costumes, ‘Christmas Event Mode’ has been introduced, requiring players to defeat AI (artificial intelligence) NPCs. Upon defeating the NPCs, in-game items will be rewarded.

Twelve new MegaPunch gloves have been added to the Gear Potential Power system. This system can unlock a Gear’s hidden Potential Power, such as Attack Power, Attack Speed, Recovery, and more.

To top off the Christmas fun, Boxing Star is introducing the ‘Christmas Mission Event’ in celebration of the holiday season. During the event, users can earn Mission Event Points by completing missions and exchanging the points for in-game rewards.

With so many things going on in the game and everyone getting into the Christmas spirit, this season is definitely one not to miss in Boxing Star!

You can find the details of the update on the Official Boxing Star Facebook Page.