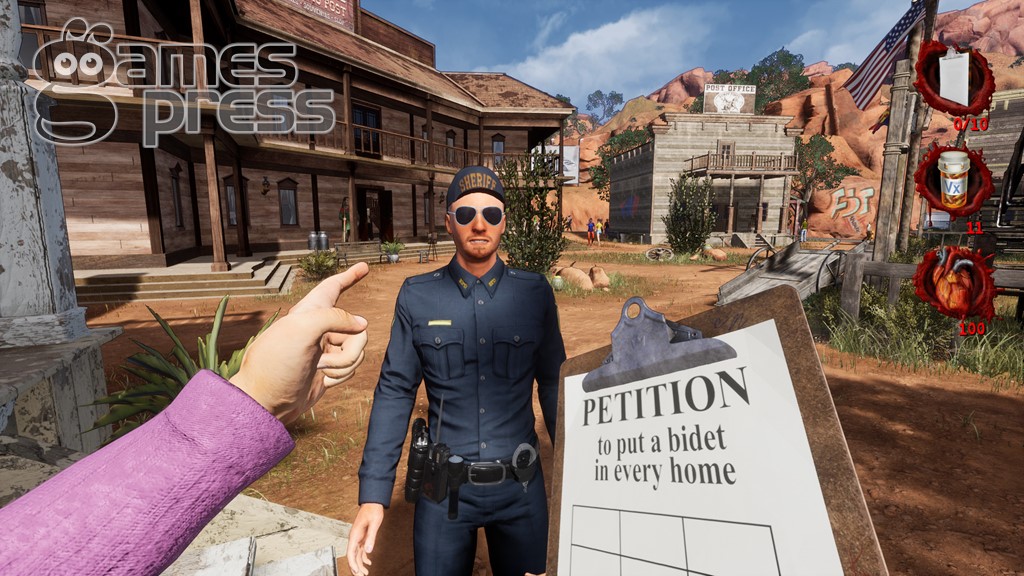 POSTAL 4: No Regerts: Wednesday Update Brings a Bidet Into Every Home

Midway through another effed up week in the charming town of Edensin, the Postal Dude awakens in the palatial estate of the Edensin Mayor himself, Mike J. As the Master Bidet-er, Mayor Mike J sets The Postal Dude loose on a righteous crusade. Cleanse the filth of Edensin by installing bidets where they matter most, in the headquarters of the toilet-paper-obsessed Wipe Militant led by Tinklage, and let the holy water flow! Resolve a diplomatic crisis south of the border. Disposable wipes and other “environmentally safe” lies about toilet paper create an iceberg-sized blockage in Edensin’s sewage system, causing tons of American sewage to burst into Mexico. Montezuma would be proud!

Hit up the newly opened Lil’s Fashion Funwear for character customization, including the Drag outfit and Classic Trenchcoat outfit from POSTAL 2. Arm The Postal Dude with the Mop, a new melee weapon capable of deflecting bullets and cleaning spills. Experience a host of new additions to POSTAL 4 including first-person splatter on the Dude and a dynamic fluid system so blood, piss and puke can flow downhill. Explore the new Affluent/Industrial District, home to lavish mansions, luxurious lawns, and the best shopping on this side of the border.

“Edensin is evolving into a place for every kind of saint and sinner to enjoy,” said Vince Desi, founder of Running With Scissors. “There’s no greater crime than killing trees for a half-assed cleaning job, and no greater pleasure than a relaxing stream of warm water hitting just the right spot.”