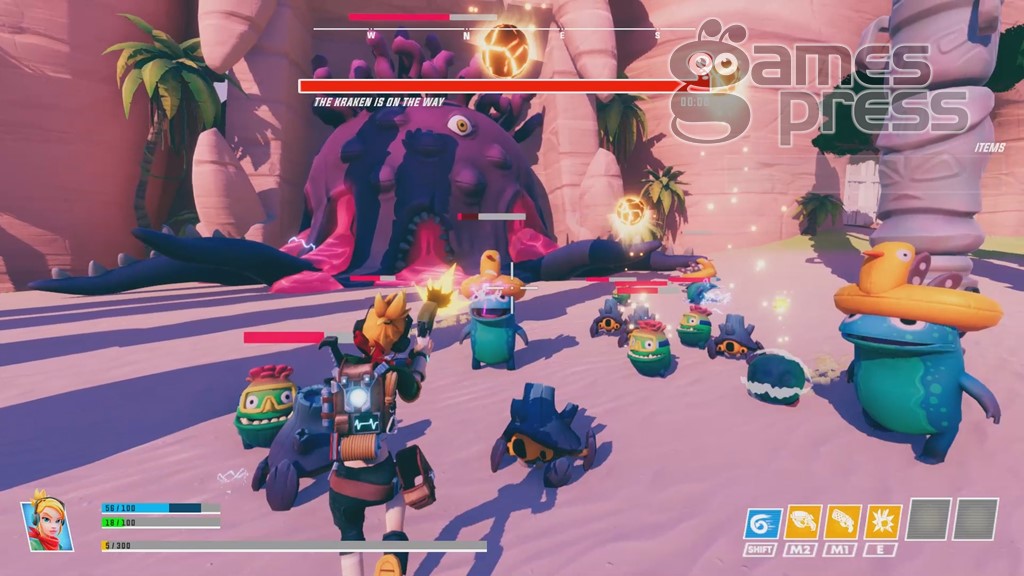 The third-person roguelike shooter Die After Sunset will hit PC and consoles soon.

Badland Publishing will publish the PlayStark title on 2021.

PlayStark and Badland Publishing join forces for launching Die After Sunset, a roguelike third-person shooter where light and darkness take on special relevance

Cartoon aesthetics, power-ups, gigantic final bosses and a plethora of playable characters will come together in a shooter in which each game will be a different adventure.

Die After Sunset is an original third-person roguelike shooter featuring open environments where the difference between light and shadow is particularly important.

In each level the player will have to get the best possible equipment among a selection of crazy artifacts. It depends on it to be able to overcome all the challenges and to unravel the mystery behind the Murkor invasion, some nice alien beings at first sight… until they are covered by the darkness.

Journalist April Blazestrong is the initial and main character on Die After Sunset; investigating the inner workings of a crashed alien ship she activates her Artificial Intelligence which, against all odds, will help her stop the Murkor invasion. Thanks to the AI, April will have the direction, technology and weapons needed to unlock the secrets of the invasion, but she must do so before the sun sets.

Luckily, April won’t be facing the Murkors alone, as she will unlock playable characters to help her in her quest as she progresses through the levels. Each one of them will bring new specific skills that will offer the player different ways to face the invasion.

Playing Die After Sunset means fighting a countdown at every level, which marks the inevitable arrival of one of the Murkor leaders. The player has to manage to delay the appearance of the boss as much as possible by completing randomly generated and assigned missions in real time: Destroy Murkor nests that are about to explode, prevent these aliens from eating the museum pieces, manage to reactivate the electricity to avoid running out of light…

Coming out victorious in these missions with the best possible result will offer unique improvements to the player and the extra time needed to make it to the head of the area and advance to the next adventure a little closer to nightfall.

Die After Sunset will hit PC and consoles during 2021.