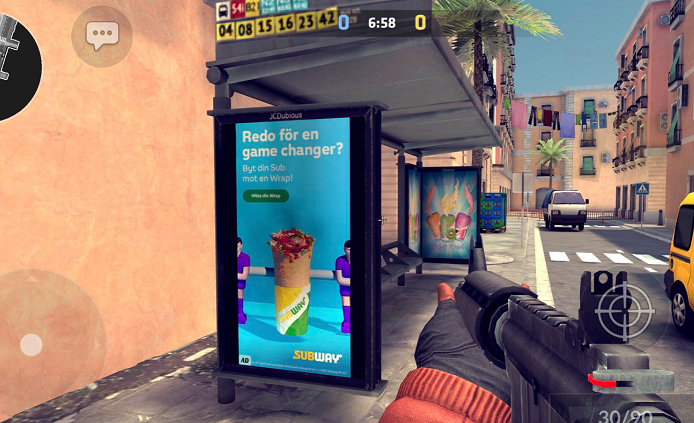 Niklas Bakos, CEO at Adverty, on why contextual sensitivity is critical for in-game ads

There is growing recognition that in-game advertising represents an increasingly important media channel for forward-thinking advertisers.

Yet, within this burgeoning channel, it’s important to focus on experiences rather than simply trying to shift products, and to think of your brand, what it stands for, and what it can offer individuals in this context.

This was made abundantly clear earlier this month when Electronic Arts decided to remove obtrusive in-game video ads from its martial arts fighting video game, UFC 4, after player complaints about the promotions that flashed up on screen during action replays, interrupting gameplay sessions.

“It is abundantly clear from your feedback that integrating ads into the replay and overlay experience is not welcome,”

read a statement, after fans flooded the company’s social channels with complaints.

It’s clear, then, that in-game ads need to feel natural and to provide a deeper, ubobtrusive experience. Fortunately, formats on offer today are varied, and far from one-size-fits-all.

In recent weeks, for instance, we launched a new, in-game brand advertising ‘In-Menu™’ format which enables contextually relevant IAB display banner ads deeply integrated on menu screens in between gameplay. The new ad unit, along with our other formats, combine both awareness and performance-based advertising, including those which allow brands to take over billboards and other virtual outdoor sites within games, offering branding opportunities which can add realism to games.

As an important channel for the future, the relatively untapped media of gaming has already been explored by brands such as Mastercard, Samsung and Subway and giants in the space such as Fortnite – which saw its Travis Scott concert within its Battle Royale game attract audiences of over 27 million.

In fact, Fortnite owner Epic Games is ramping up its virtual events business at a time which feels fortuitous for the brand given that so many live events are struggling to go ahead. This month saw a concert series called Spotlight, for instance, while the company has built a studio space in Los Angeles in which entertainers can perform for an in-game audience. The production team consists of event coordinators who have helped put together the annual Fortnite World Cup, held at Arthur Ashe Stadium in New York – again watched by millions online. CEO Tim Sweeney has been public about his intention to turn Fortnite into a virtual living space where fans come together and congregate with friends, while its Spotlight series now looks set to continue into the Autumn months.

Similarly, back last May, Nike released trainers which were only available in the game, in yet another example of the potential for partnerships and promotional offerings in settings populated by gamers – which now number 2.7 billion worldwide.

Why context is key

To be successful in their forays into this media channel, brands must always aim to show real understanding of the audience and the game. The better you can contextually match a brand message with a gaming experience, the better the outcome for both the end user and the advertiser. Those that fail to do this will emerge red-faced, as evidenced by the quick abandonment of interruptive ads in UFC 4 this month.

Yet there is still a disconnect between game developers and advertisers, too, despite the fact that in-game advertising can reduce dependence on in-game purchases. Better integrations will happen when developers are spoken to earlier on in the process – and the industry doesn’t just do what is easy to do and what has been seen and done before.

Our studies with Dentsu Data Labs have proved that unobtrusive in-play ad units which don’t interfere with gameplay can lead to significant lifts in brand recall. The key is to target users in a contextually appropriate way and to build brand awareness sensitively, not focusing on product alone, but starting with contextually appropriate branding and building from there.

Mastercard is aware of this as it treads carefully into the world of in-game advertising with its ongoing League of Legends tie-up. Its global relationship with owner Riot Games deepened this summer, reinforcing the brand’s involvement with the growing eSports community. The strategy doesn’t look too different from its sponsorship model with other sports leagues such as PGA, but it demands a different, less commercialised approach. Fortunately, Mastercard appears to have recognised the importance of generating trust; something which is especially important for a brand not traditionally associated with the space – and a traditional, financial services one at that.

No doubt it can see that the relative newness of eSports as an advertising channel carries benefits when it comes to first-mover advantage, as well as access to traditionally hard to read audiences. As such, in June, the financial services brand announced plans to become Official Payment Partner of the Northern League of Legends Championship during the 2020 season.

Ad investment lags the popularity of the channel

Let’s not forget, too, that lockdowns the world over led to dramatically increased engagement in a number of games whilst audiences were stuck at home. As a result, earlier this year, even luxury fashion brand Gucci got in on the act, partnering with Wildlife, a mobile gaming company, to make outfits similar to those worn by game characters in “Tennis Clash.”

In-game advertising still lags some way behind the eyeballs and engagement of the space, but technologies such as AR, VR and 5G will only serve to make it more compelling. If brands opt for contextually sensitive approaches, success stories will help to turn the tide.