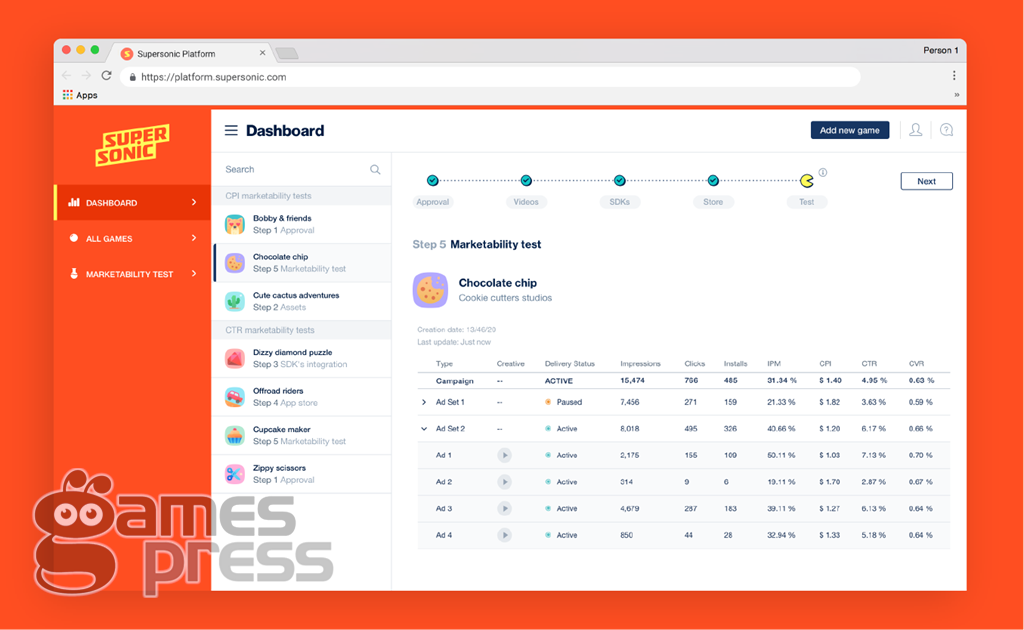 Leading hyper-casual game developer and publisher Supersonic Studios, owned by mobile marketing company ironSource, announced today the launch of its self-serve platform. The new platform opens up the market for all developers to test their game’s performance and discover its marketability. Bringing such automation to the game publishing process, will enable more potentially successful games to be discovered, and more developers to enter the market. To celebrate the launch, all games tested during Q3 get an additional testing bonus if they hit certain CPI KPIs.

The user-friendly, self-serve platform streamlines the process for mobile game developers to test the likelihood of their game’s ability to scale and be profitable. A developer may upload and test as many games as they wish to the platform, which are then checked by a member of the Supersonic team to ensure the games are in alliance with the terms and conditions of the app stores and market trends. The approved games are then easily viability tested, through ad campaigns, for a minimum of three days.

To kick start the launch, Supersonic is offering an immediate cash testing bonus to any developer who tests their game on the self-serve platform during Q3 and hits certain KPIs: those who hit a CPI of 20 cents or lower will get $15k, 30 cents or lower receive $5k and 40 cents or lower receive $3k. These CPIs are early indications of a game’s potential and are the starting point from where a publishing deal with Supersonic can be created, with the aim of turning the title into a larger, global opportunity.

“We have two goals here. One is to make the publishing process as easy as possible to allow for a quick and simple testing process and the other is to maintain a true partnership with the developer, ensuring total transparency,” explains Nadav Ashkenazy, GM of Supersonic. “The developers are our partners and it’s key that we give them an equal level of visibility into their game, so that we can make strategic decisions together about how to proceed.”

In the coming weeks, the platform will already undergo a major update offering all developers with published games access to advanced data and the highest level of transparency to their in-game metrics. This ensures that both the developers and Supersonic are equally aware of all activity within the games in order to optimize and maximize their LTV.

To access the platform and submit your game, visit: www.supersonic.com. The offer is subject to Supersonic’s terms and conditions.